Skip to main content
Home Sibling stories Matt – “Ten minutes before a work meeting, I could find myself changing my adult brother’s nappy”

A well-meaning HR Manager once told me that she understood the difficulties I was having juggling issues with my brother’s care and a full-time job because she was a working parent and she too had the juggle childcare and work. I responded (perhaps slightly unfairly on reflection) by pointing out that as a parent she’d made some kind of conscious decision that the challenges of being a working parent were worth the trade-off of being a parent whereas I hadn’t chosen to be a sibling.

My brother Jon has cerebral palsy, severe learning difficulties and other complex needs. He’s two and a half years younger than me physically, but mentally he’s a permanent toddler with a love of toys, picture books and Thomas the Tank Engine (original series, not your CGI nonsense!) He’s got a unique personality and despite what you might read into my remark to the HR manager, I’m lucky, in many ways to have the relationship I’ve got. 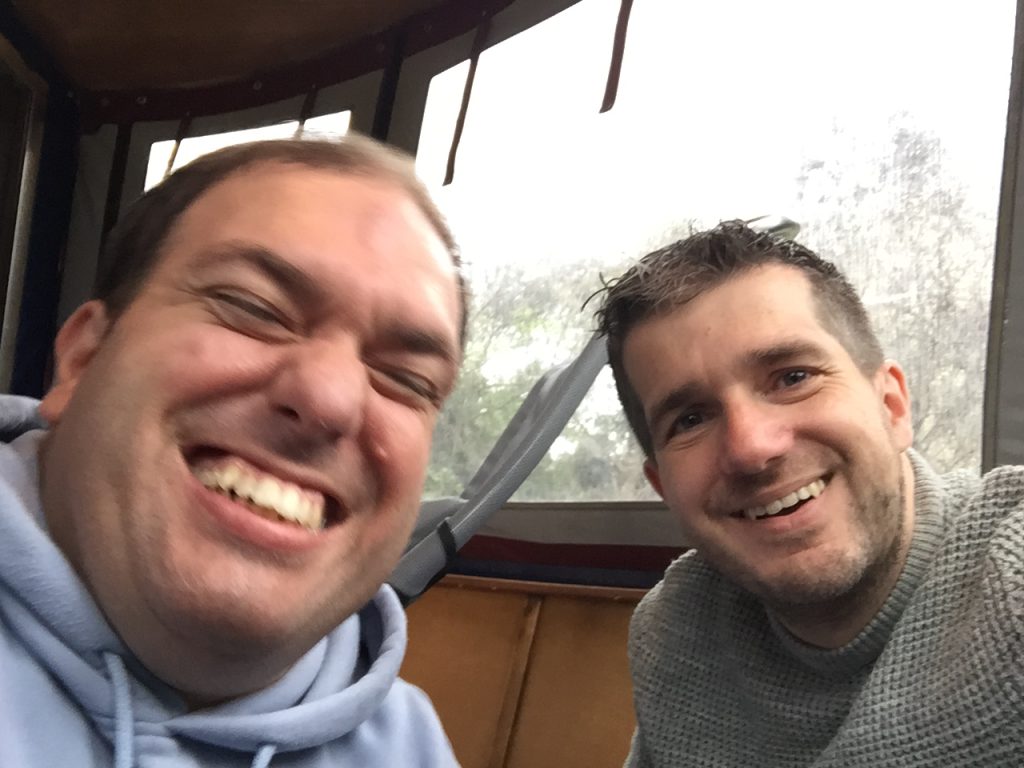 But that doesn’t make it easy and at the time I was having this conversation I’d had to deal with the sudden decline of my Dad’s health, his nine months in hospital, coming home permanently disabled himself before passing away. Juggling that and a full-time job would have been enough for most people, but as a sibling I had the extra challenge of trying to secure care for Jon.

Until he got ill, my Dad was one half of my brother’s care package and when he was suddenly incapacitated, I was the only person able to step in and fill the gap to ensure Jon could still go to his daycentre and live a fairly unchanged life whilst chaos reigned around us.

For quite some time, my days were starting at 5:45am, consist of helping to get Jon out to his daycentre, then either working from home for the day and running up to the hospital to see Dad in the evening or commuting to London for a full day in the office, coming home, getting Jon to bed and finally getting my own head down around 11:30pm. It was unsustainable and I was drained, so I ended up taking a four month unpaid sabbatical to try to balance everything without the pressure of work, sapping my savings in the process.

Social services were very little help despite everything and it took eight months and the threat of legal action before we finally got Mum the support she needed to cope with Jon and I could step back. Even then, the quality of the care varied from the guy Mum refused to allow into the house because she didn’t feel comfortable around him, to the guy who could whisk Jon up to bed in ten minutes flat leaving him slightly dazed and confused, to the woman who said hoisting Jon into the bath was too risky and he should be washed on the bed. Only one of the carers we’d been supplied with knew how to handle learning difficulties and could get the balance between supporting Mum and encouraging Jon to do what he needed to do.

This led to me spending most of the weekends at Mum’s, covering the care shifts when suitable help was unavailable and on multiple occasions doing the bedtime run to get Jon upstairs and in bed. This was not because my Mum was unwilling to cover the gaps when they occurred, but more because she was unable to given her own health and mobility problems brought on from over thirty years of heavy duty caring.

This was leaving me pretty burned out and I was trying to negotiate some flexible working in a department that believed wholly in the office environment (ironically some nine months before Covid sent us all home).

But of course, when I’m trying to explain the issues I’m facing, from an outsider’s perspective it looks like I’m doing what millions of working parents or employees with elderly relatives are doing. Why should my experience be any different?

Perhaps because my own life was on hold whilst I tried to deal with these issues. I was losing over a week of annual leave a year in half days to take or pick up Jon from his respite when his stays started on weekdays. My weekends were almost exclusively supporting my Mum and brother and there was a constant list of jobs that needed doing from tackling problems with the care company to chasing assessments or appointments that he needed.

Not only that, but there didn’t seem to be an end in sight. It felt like this was going to be my life forever more, or at least until such a time as Jon moved out of the family home. Everything had changed on the flick of a switch the moment my Dad was taken into hospital and I hadn’t had a chance to prepare or process, I was just trying to keep everything moving. Ultimately it was little surprise, perhaps, that I ended up being signed off work for a month.

As part of the conversations in this period, trying to explain how siblings and carers have different challenges, I glibly asked if they even knew how many people in the company were in a situation like mine. Some months later, they announced the launch of a Working Carers network.  By this point we’re heading into the pandemic and the balance of home and work is on everybody’s mind with home-schooling for parents.

Although Jon wasn’t officially on a shielding list, with his daycentre shut and not needing carers early in the morning, we cut back to just the bedtime call to reduce contact rather than reschedule all of his appointments. For the second time in three years I shut up my house for a period and moved back into my Mum’s to support her with Jon’s care.

It was a different experience second time around, largely because Jon was at home with the rest of us. He couldn’t quite understand why I was sat in my Mum’s dining room all day or why he couldn’t have the Alexa on whilst I was on conference calls. A closed door was no barrier either, he can reach up to door handles and was incredibly pleased with himself when he ‘broke in’ to my makeshift office mid-meeting.

These were familiar challenges for many people. But with the reduction in visits from the carers, behind the scenes there were less familiar challenges. Ten minutes before a meeting, I could find myself changing a nappy. That early presentation that it’s deemed we watch is playing whilst I’m helping to get Jon ready for his bath.

I met others through the working carers group

But curiously, thanks to the working carers group, I was discovering other people who were tied up in similar worlds. A senior exec who disappears because his disabled daughter is having a fit. The colleague with an autistic child whose home-school experience is far more challenging than other parents. Unbeknownst to me (but perhaps not surprisingly) there were a huge amount of people in the company balancing challenges and whilst everyone’s experience was unique, the themes were familiar.

I left that company in 2021 and after taking a few months out between jobs to secure Jon a place in a residential home that he’s settled well into, I’m now working for a much smaller company.

Whilst life is simpler with Jon now settled in residential care, there are still challenges and things to chase. For now, it doesn’t intrude into my work, but I’m acutely aware that at any point something could come along. Because unlike the child of a working parent, Jon won’t become more independent the older he gets. My role as his sibling will always be one that requires looking out for his wellbeing and when it next spills over into the day job, I can only hope that whoever I’m working for at that point understands to challenges.