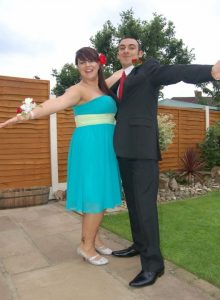 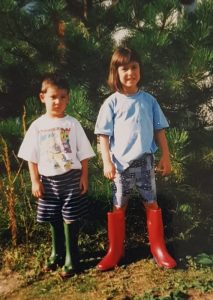 When people hear I have an autistic sibling, they always seem to jump straight to an apology… like I should feel sad that my brother has autism. Personally, I have never understood this. I love my brother more than life itself and he is the greatest person in my life. It’s hard to say whether our relationship would be different if he was not autistic, but I’d like to think we would still have our Disney obsession. I don’t ever remember not being close to my brother. Autism is not Ben and Ben is not autism – he is my baby brother.

I owe my career to my brother. I knew one day I’d want to be an autism researcher. I want to get my PhD so that I can offer my knowledge to others. I want to show the world the awareness I wish I could have given my family about autism.

Sleep deprivation took its toll on my parents and on me

My brother didn’t have a sleep routine. This made my parents sleep deprived too and made their behaviour different. They were more irritable and this impacted on me. I do not in any way blame them for this irritability as I know what I am like if I have one day of disrupted sleep, let alone the months they suffered. I am not sure if she knows, but I remember my mum crying. I remember seeing the sleep deprivation take its toll. I was so young that all I wanted to do was give her a big grin and make her smile back at me.

My brother’s sleep got better but by then the sleep deprivation had already set in. My current sleep patterns are very odd and I have always suffered with fatigue. Whether this was inevitable or due to sleep disruptions when I was a child, I will never really know.

Everything was about Ben and I felt left out

There is a lot of information out there about how supporting a child with autism affects parents, and there is a lot about the child who is autistic. But what about me? The most important part of my life, the part of my life where my core personality was built, became all about how to help Ben, or how things were for Ben. I know how much my parents love me, I know how much my brother loves me, but it was still hard thinking that I was second.

I was so jealous of my brother and this pushed me to become attention seeking. I pushed my parents to notice me, but as a young person, you do not quite see the negative impact this had. I was very good at mathematics but purposely became bad at it on paper “just because…”! My rebellious attitude completely changed the path I took and I achieved average grades. Looking back on this, I wish I had accepted the subjects I was good at.

The thing is, despite feeling that I was not as important as Ben, I was always protective of him and never treated him like I was jealous of him.

I wasn’t treated equally to my brother

I was diagnosed with dyslexia when I was 19 years old, yet when I told my parents, they did not seem surprised at all. In fact, one of the first things they said was “Well, I always thought you were”. This really angered me! They were told through both primary and secondary school that I was lazy. I wish my parents had demanded that I was not lazy and that there was something else going on. I couldn’t help but think “but you didn’t do that with Ben”. When there were signs that something was happening to Ben, they ran around like headless chickens to get an answer. But not with me. With me, they left it. This is by far the hardest thing to feel. I know my parents love us equally, but this point in my life was hard to get past.

I supported my brother at school and university

My parents supported Ben, but at school I feel the baton was passed to me and I tried to look out for his wellbeing throughout primary and secondary school. He watched me get into university and I think this helped encourage him to decide to go too. Once he got into university, I supported him by becoming his disability mentor. I was there with him every second through his degree. His determination to be the best version of himself was inspiring.

When people used to tell me that Ben wouldn’t amount to much, I used to just see red! It both baffled and angered me that somebody could pigeonhole him like that because he was under the autism umbrella.

I worry about the future

Sometimes I worry about the future. I worry about a time where my parents are no longer with us. I worry about Ben’s mental wellbeing because it takes him longer to adapt to change. I worry that one day this support circle he has won’t be there. Even if I am scared about what the future may hold for Ben, all I know is that I will keep supporting his autonomy until his independence really is all him.

Other people just don’t get it

I feel my extended family gave my brother a wide birth when he was younger as many of them thought autism just meant you were violent and rude. I had cousins that would call him “troubled” and they would never understand why he would always “hide behind my mum”. As his life progressed, he later began to “hide behind me”.

We are always protective of our younger siblings, and I always felt there was more to it with me and Ben. I always wanted to make sure that people were not treating him differently. It was always easy for people to point at Ben being different.

It’s me who really understands him. You can sometimes see my parents get annoyed at my brother for things that are directly related to his repetitive behaviour. For example, Ben showers at 8am. When my mum is still in the shower at 7.59am, Ben starts to feel agitated at the idea that my mum does not care enough about his normal routine. It is situations like this that make Ben gravitate towards me.

Previous post: Amy – “I was a young carer for my disabled sister”
Next post: Prakash – “My brother and sister both have severe learning disabilities and epilepsy”