Skip to main content
Home Sibling stories Pam – “My own artwork, and that of others, helps me to uncover meaning and better understand my life as a sibling”

My twin severely autistic brothers were institutionalised at the age of 7. I was 6 and our younger brother was 5 at the time. This was in 1962. I do not remember our parents explaining to us what was happening, nor why our family was being broken up. I remember that my twin brothers were not ‘normal’, and they were a handful for our mother, but why were we all living under the same roof one day, and then two of us were living elsewhere the next? Ever since, I’ve had a feeling I can only describe as a weightiness of responsibility for my brothers, even when they were under the care of adults, and I was a child.

As a sibling of non-verbal autistic twin brothers, I’ve always felt that I was Born to be Responsible, the title of this piece I made in 2019, of hornton stone. My mother said that I was born independent – but is a child equipped to fend for herself, especially concerning her emotional growth – alone? Somehow I managed to reach the age of 62 more or less intact. 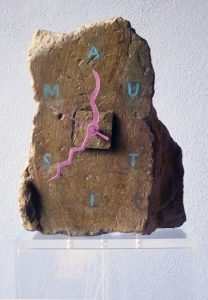 Born to be Responsible by artist Pam Foley http://pamfoley.co.uk/

Joyous art belies the early suffering of its maker

This is called The Three Graces, by my favourite artist, Niki de Saint Phalle. Her ‘nana’ figures, large, rotund, and colourful, convey a jubilant and exuberant feeling of freedom and abandon. It’s humbling to think that the person who made this, had been raped by her father. As I look at this artwork, and contemplate her story, I find it a powerful reminder to find strength and self-acceptance in pleasurable acts. Her childhood suffering is incomparable to mine, but need not be. The fallacy that children are resilient is repeated as a truth – but do children really have a choice when faced with hardships and challenges they have no control over? It’s what we make of our struggles that I find interesting in others, and now, as I become used to self-identifying as a sibling, in reflection upon my own life and how I have lived it. 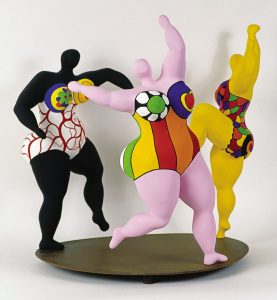 My autistic brother dies, and it was unexpected

When my autistic twin brother Kevin died in 2015, I was deflated – shedding tears alone didn’t seem to be enough to let loose the unbearable sadness I felt. When I look at the face in this drawing by Kathe Kollwitz, it expresses the anguish I felt at the time. The title of this is Death as a Friend. Kollwitz witnessed death constantly, whether drawing the poor patients in her husband’s doctor surgery, living life between the two world wars, or when she experienced the death of her soldier son. She possessed the tools, technique and vision to help us understand the incommunicable, without the need for words. 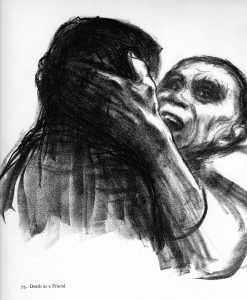 Death as a Friend by artist Kathe Kollwitz

When I was young, and my twin autistic brothers were living in an institution, they were often home for special events such as their birthday and holidays. To those who didn’t know us, we seemed the typical 1960s family: mom, dad, girl and boy. A childhood friend who lived a few doors down, Carol, often spent time at my house, and me at hers. Our mothers would make cakes and we would play games with the neighbourhood kids. Carol and I have remained friends and she recently told me that she thought our household was ‘normal’. She had seen and knew about my twin brothers. When, years later, she told me about some unspeakable events that went on in her household, I was in disbelief. To me, hers had seemed so ‘normal’. What does ‘normal’ mean, and why is the appearance of normalcy so important to children? This is a question I’m particularly interested in exploring. 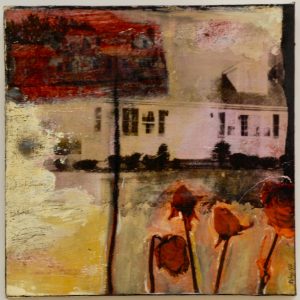 A chiselled smile on the face of my brother, Kevin

Kevin wasn’t a naturally welcoming sort of person. In fact, he was a curmudgeon. I would often say to him ‘Come on, crack a smile!’ This is why I choose to make a print of him using the stone lithography method whereby greasy pencils are applied to a smooth stone. The stone is inked up and then run through a lithography press. What I love about this method of printmaking is the use of tusche – a grease-like liquid mixture that when applied to the stone surface with an eyedropper, will pool and run, to create unexpected textures. I placed the tushe within Kevin’s face, and in the background because, to me, he could be unpredictable and multi-layered in his responses. And on the rare occasion, accompanied by a twinkle in his eye, he would ‘crack a smile’. 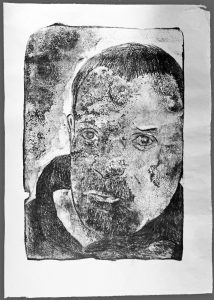